This page:UHH > Humanities > AAI > The Early Islamic Empire at Work - The View from the Regions Toward the Center > News > lecture series > lecture kristoffer damgaard

Gazelles Around the Oasis: A Thalasso-Centric Approach on the Expansion and Formation of the Early Islamic State

In his lecture Kristoffer Damgaar follows a thalasso-centric approach on the expansion and formation of the early Islamic empire. The speed and overwhelming success of the Islamic expansion in the 7th to 9th centuries has been extensively studied by scholarship, and the process is often indexed into regions falling under Muslim dominance, and the subsequent political organization of these within an Islamic context. Emphasis has usually been on large and well-defined swathes of land (e.g. Egypt, Syria-Palestine, Persia, or Central Asia), in which the dynamics of expansion and hegemony were seen as conditioned by local traditions and extant infrastructures. It is rarely argued that the Muslim polity and its agents applied a distinct and premeditated strategy in the process of winning and maintaining control of particular regions, and when it is, this is usually as a response to localized difficulties or resistance.

In his lecture, he diverts from both these established tropes by focusing on the Red Sea; a region that not only is geographically central to the early caliphate, but which is maritime rather than terrene. He argues that the development of this region into an Islamic sphere was the result of a strategic outlook and approach that is distinctly different from other regions falling under the banner of Islam. In doing so, he forces us to reconsider the processes of Islam’s expansion and the formation of a formal polity.

Maritime spaces, and the Red Sea in particular, was far from insignificant in the creation and maintenance of a stable Islamic state, and Kristoffer Damgaard strives to demonstrate how social memory and nautical experience and outlook caused the Muslims to perceive this region not only as central to their political identity, but as a purveyor and mobilizer of crucial resources through trade, production and extraction. 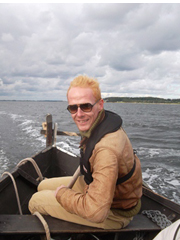 His main academic interests concern the cultural and socio-economic processes associated with the rise and expansion of Islamic society. My research focus is currently on the linkage of, and mobility between, the eastern Mediterranean, the Red Sea and the Indian Ocean littorals – in particular from a mercantile perspective. These littorals are viewed as coherent regions of interaction and analysed as flexible and dynamic ‘cultural continents’ bound as much to the bodies of water they delimit, as to the landmasses they connect.

I am engaged in a multi-tiered programme of research that hinges on two conceptually linked field projects. The first, the Aylah Archaeological Project is engaged in the excavation and analysis of Aylah in modern Aqaba (Jordan); a nodal emporium heavily engaged in both maritime and terrestrial networks of exchange in the Early Islamic period (650-1100 CE). A complimentary but independent project, the Coastal Connectivity Survey Project (CCSP), will over the coming years (2013-2015) investigate the trajectories of movement to and from this nodal centre of commerce by means of a series of coordinated archaeological surveys in the wadi systems behind Aqaba. The results of these surveys will be correlated with archaeological data from large parts of Southern Palestine, in order to ascertain as complete an understanding of the conditions and modes of movement in a landscape characterized both by hyper aridity and entrepreneurial spirit.

My research interests also include the formulation of cultural concepts and identities in material culture, and I consider the expanding commercial networks under the aegis of Islam as an important factor in the gradual formation of a globalised mind set in the early Middle Ages.