This page:UHH > Humanities > AAI > The Early Islamic Empire at Work - The View from the Regions Toward the Center > News > lecture series > lecture jacob tullberg

From Empire to Commonwealth in the 4th/10th Century: Comparative Perspectives

The long 4th/10th century (beginning some decades into the 3rd/9th century) witnessed a gradual erosion of central power in both Carolingian Europe and the Abbasid Empire.  However, only in special cases did new regional rulers style themselves as Emperor/Caliph. In most cases, they remained under the “umbrella of legitimacy” provided by the “universal” ruler. In the European case, many historians of the 19th and 20th century hardly noticed this essential feature at all, because they were preoccupied with writing national history. But to chroniclers of the time, there was no doubt that a universal empire was still in existence.  A comparison of the post-Carolingian and the post-Abbasid world therefore yields beneficial insights for both the medievalist and the Islamicist. The 4th/10th century Carolingian World and Abbasid World had much in common: erosion of central power, consolidation of literary culture etc., but there were also significant differences: the Carolingian Empire had never been a tax-extracting polity like the Caliphate, and the Roman-Catholic church had no true equivalent in the Caliphate. 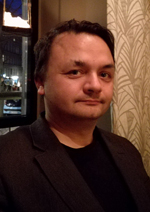 Dr. Jacob Tullberg  (Researcher and Lecturer at the University of Copenhagen - SAXO-Institute - Archaeology, Ethnology, Greek & Latin, History) is a member of Prof. Peter Bang’s research project on “Rome in the World History of Universal Empire"  with a  focus not on empire but on ‘post-empire’, on the ways in which the Carolingian and Abbasid Empire developed into commonwealths rather than true empires.

Dr. Tullberg considers himself as medieval historian who has expanded his professional focus and interests to a wider Ecumene. Much like the medieval travelers such as Marco Polo and Odorico da Pordenone, who ventured beyond the borders of medieval Christendom and became overwhelmingly  fascinated with what they saw.

He wrote his doctoral thesis (2012) “Beyond Feudalism - Comparative Perspectives on the European Middle ages” on the Carolingian Empire drawing a comparison between the post-Carolingian and the post-Abbasid world. It is essentially a critique of the notion that a medieval feudalism existed as a coherent and general phenomenon. It features a comparative study of social and political institutions in Catholic Europe and the Islamic world in the years 900-1400 A.D.  Feudal relations could be found in some countries, at some times in some contexts, but were never the essential kind of social organization. This could be clearly seen by comparison with the Islamic world, where an equivalent of the fief, the iqta ,also existed in some countries, at some times in some contexts.