This page:UHH > Humanities > AAI > The Early Islamic Empire at Work - The View from the Regions Toward the Center > Publications & Tools > Database

The project has developed a prosopographical database on the administrative and economic elites of five key regions of the early Islamic empire. The database will be available for the public soon.

Short Description of the Data Model:

The database is an event-based prosopographical database of (mostly administrative) personnel of the provinces studied in the ERC project The Early Islamic Empire at Work: The View from the Regions toward the Center (2014-2019). 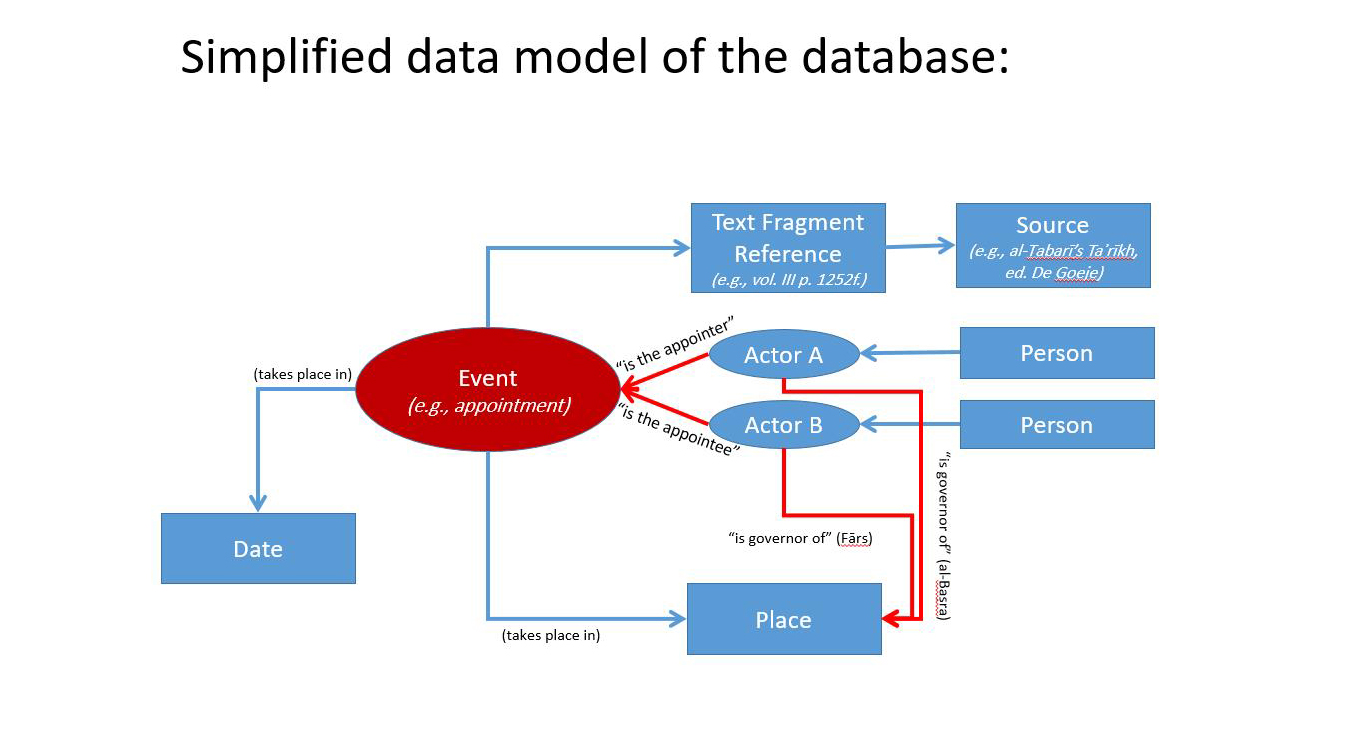 The three main information entities recorded in the database are Persons, Places and Dates. The database is event-based in the sense that every piece of information in the database is recorded in the form of an Event: for example, to record the governorship of person X over province Y from the year 1 until the year 2, at least two events are created: an beginning of term event and an end of term event. This structure resembles the way how the primary sources usually record this kind of information. Even a mention in a source that person X was governor of province Y during year 1 is represented by an Event (i.c., a YearActive Event). Events are also linked to references from (mostly primary) sources. Events are the glue of this database: they link together dates, places and persons, and provide a way to reference primary (and to a lesser extent, secondary) source material.

- appointment (A is appointed by B)

- dismissal (A is dismissed by B)

- expulsion (A is expelled by B)

- end of rebellion (of A against B)

Persons are linked to events by way of an intermediate entity, called Actor: Actors represent the roles played by a person in an event. Events usually involve two actors (sometimes only one), referred to as A and B; their roles in the Event are described in the list of Event Types above. In our example above, our governor X will play the A-role (the appointee) in the appointment event in year 1. A relationship marker is used to detail that governor X was appointed governor over place Y in this event. Of course, the same person can play many different roles in different events during his lifetime – in fact, his lifetime will be recorded in the database as a string of events.

The Early Islamic Empire at Work database was built using Heurist, a cooperative MySQL-based data management system developed at the University of Sydney. Heurist helps humanities-researchers create their own database based on building blocks made by and for other researchers. The building blocks consist of record types for describing different kinds of objects in the database (e.g., persons, places, books); record types are made up of fields (e.g., for the book record type: author, title, publication date, …), and are highly customizable to the user’s needs. Other useful building blocks are hierarchically organized lists of terms (e.g., countries, geographical relations between places), which can be expanded or otherwise adapted to users’ needs. The building blocks can be connected using two types of relationships between records: record pointers, which simply connect a field in an object’s record to another record (e.g., a page to a book); and relationship markers, which add a description of the type of relationship between two records to the record pointer.